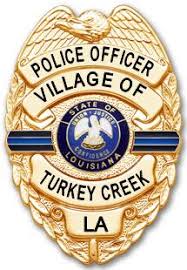 The Turkey Creek Police Department have remained busy handling various complaints and drug issues. According to a spokesman for Police Chief Steven Ardoin, on Monday July 19, officers with the Turkey Creek Police Department attempted to stop a Honda Pilot with switched plates which in turn led officers on a short vehicle pursuit where the Patrol K9 vehicle was rammed by the suspect where he ultimately crashed the patrol vehicle where the officer and K9 sustained minor injuries. The suspect’s vehicle was later located abandoned on Royal Road by the Evangeline Parish Sheriff’s Department. The incident is still under investigation by the police department. They are asking for anyone with information to please contact the Turkey Creek Police Department at 461-2212. On July 10, a complaint came in about vandalism at the First United Pentecostal Church of Turkey Creek and the complaint was thoroughly investigated. After investigation on July 12, it was learned that two juveniles committed the act. Mrs. Kimberly Campbell of Turkey Creek was cited for improper supervision of a minor. Mrs. Ashley Naquin of Mamou was asked to come in for questioning and upon doing so she wound up being placed under arrest on charges of disturbing the peace, criminal damage to property and resisting an officer. Last Thursday, July 15, while conducting traffic control, officers with the Turkey Creek Police Department made a traffic stop for a minor vehicle infraction. After further investigation and a positive alert from their drug dog, Ice, presumed crystal meth was located. The suspect was identified as John Lea of Ville Platte and charged with possession of schedule two narcotics. Turkey Creek Police Department is continuously striving to make the village a safer place for the residents. Chief Steven Ardoin thanks the public for their continued support and to report all suspicious activity and all suspects are innocent until proven guilty.

An array of singers, including John Legend and Keith Urban, have performed “Imagine” at the opening ceremony of the Tokyo Olympics. #TeamAustralia pic.twitter.com/EtyjtykUEK